Burnsville consulted with federal, state, and county wildlife management experts both to identify impacts and concerns and to develop an understanding of a range of management options. The city hired a consultant to research impacts, management options, and compile examples of approaches that other communities have taken.

A full range of options was considered, including lethal, non-lethal, and educational options. A number of public hearings were conducted to get resident's input. Ultimately, the decision to initiate Burnsville's deer management program was made by the City Council.

Sharpshooting was used as the initial means to reduce the deer population, with planned follow-up with archery once the desired deer density (25/square mile) was attained. For years, high-level archery volunteers through the Metro Bowhunters Resource Base conducted the archery hunting. In some parts of the city, residents were opposed to closing the parks to accommodate hunting. The result is that in five of six of the City’s management zones, sharpshooting over bait, often at night, is the method of choice. Metro Bowhunters Resource Base still conducts one annual hunt in southeast Burnsville. Contractors implemented the sharpshooting component until 2010. At that time, the Burnsville Police Department took on the responsibility of the sharpshooting, a service paid for through the deer management program budget. The annual budget for the DMP is approximately $40,000 per year, although most years the city spends less than the budgeted amount. Burnsville's Natural Resources Technician manages the program along with other job responsibilities.

The Parks and Natural Resource Commission provides annual reviews of the program. Progress toward objectives is tracked with aerial deer counts (and adjustment of removal numbers as needed), residents' complaints, number of deer-vehicle collisions, and sharpshooting results. Burnsville has a webpage dedicated to deer monitoring, which includes crash maps, citizen observations (collected through a web form) and aerial survey results. The annual report from the last several years is also available on Burnsville's deer management website. The program is evaluated by the commission, which makes a recommendation to the ciy council for annual approval. Overall, Burnsville considers its deer management program to be a success. Resident complaints are down, as are the number of deer-vehicle collisions. Aerial surveys indicate that deer population levels are close to the desired targets. The city finds the aerial surveys especially useful in giving residents a visual that although deer numbers are being managed, they are by no means being extirpated from the landscape. 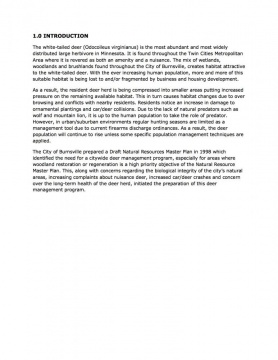