Mumford Cove, Connecticut is a small residential community (fewer than 150 households) located on a small peninsula surrounded on three sides by Long Island Sound. Residents contacted the Connecticut Department of Environmental Protection (DEP), expressing concerns about Lyme disease and deer damage to shrubs and gardens in 1991. Growing concerns led the community to endorse a DEP study of deer movement beginning in 1995, and a deer reproduction control experiment by the Humane Society of the US (HSUS) beginning in 1997. By 1999 residents’ concerns about Lyme disease had become so great that the Mumford Cove Homeowners’ Association (MCHA) formed a tick committee, which recommended that MCHA implement lethal deer management. A vote by MCHA members resulted in decisions to eliminate the community’s no-hunting ordinance, initiate a deer hunt, and terminate the deer reproduction experiment. A wildlife management committee was formed to design and coordinate the highly controlled annual hunt, which has occurred since 2000. Monitoring has documented that the deer population has been substantially reduced, plant damage is less severe, tick abundance has declined, and residents perceive a lower incidence of Lyme disease.

Individual residents began contacting the Connecticut Department of Environmental Protection (DEP) in 1991, expressing concerns about Lyme disease and deer damage to shrubs and gardens. DEP suggested ways residents might reduce deer damage, but took no further action. Mumford Cove is bordered on its north and south by state-owned open space areas where deer hunting was prohibited, and local ordinance prohibited hunting within Mumford Cove. DEP eventually proposed a study to assess deer population and movements between Mumford Cove and bordering lands. The MCHA accepted this offer and a deer movement study was initiated in 1995 and continued until 2001.

Several community residents felt strongly that lethal deer management was urgently needed to reduce the negative impacts of deer. In 1996, an individual from outside the community heard about the proposal for lethal deer management and came to Mumford Cove with a proposal for research by HSUS and the University of New Hampshire to conduct a study of deer reproduction control. The MCHA was receptive to the proposal, but it would not pay for the study.  The person who originally contacted the HSUS offered to fund the study, and it was initiated in 1997, concurrent with the deer movement study.

In 1999, Mumford Cove formed a tick committee to address the issue of ticks in the area.  All but one member of the committee agreed that the homeowners’ association needed to implement some form of lethal deer management.  Committee members could not come to consensus on management actions, so they held an association member vote to make their decision. The association members voted on the following action alternatives: (1) eliminate the no-hunting ordinance, (2) implement a hunt in cooperation with the DEP, (3) continue the reproductive-control study, or (4) begin a new tick control study.  The vote resulted in decisions to eliminate the Mumford Cove no-hunting ordinance, initiate a hunt, and terminate the reproductive-control study. The Mumford Cove Wildlife Management Committee (MCWMC) was formed to coordinate the details of the hunt.

The MCWMC and the DEP held a series of meetings between July and November of 1999 to design a hunt for the area. They decided on hunter density, the days of the hunt, the weapons to be used, and other issues related to implementing a hunt. Hunters are carefully screened, must pass a shooting proficiency test, and are assigned to specific locations. The first hunt occurred in 2000. In 2001, the hunt area was expanded to include the adjacent community of Groton Long Point.

DEP sponsored surveys of Mumford Cove residents before after the 2001 deer hunt, as well as deer population and movement research between 1995 and 2001. The agency later sponsored research to assess tick abundance. Research documented a substantial reduction in deer numbers and density (from about 80 per square mile to 10 per square mile). Surveys indicated that residents saw deer less frequently and perceived less plant damage and a lower incidence of Lyme disease after several years of deer population reduction. Survey results also reveal strong community support for the hunting program.

Survey completed by a wildlife professional 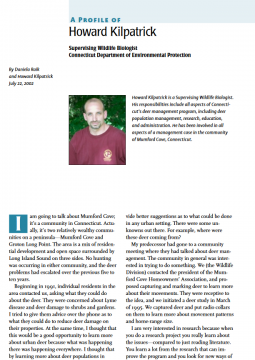 Community based deer management involves collaboration between local entities and state wildlife management agencies. This document provides a profile of Howard Kilpatrick, a state wildlife biologist who was involved in all phases of the Mumford Cove case.

GET THIS RESOURCE CLOSE 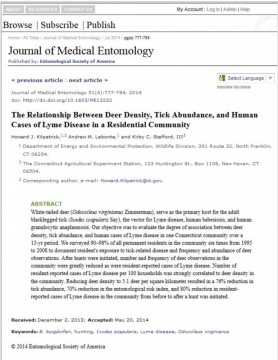 The Relationship Between Deer Density, Tick Abundance, and Human Cases of Lyme Disease in a Residential Community
×

The Relationship Between Deer Density, Tick Abundance, and Human Cases of Lyme Disease in a Residential Community (Tuesday, July 1, 2014)

This peer-reviewed article chronicles the ways in which community-based deer management in Mumford Cove, Connecticut reduced Lyme disease incidence over a 13-year period.