The dramatic increase in the white-tailed deer population within the Town of Southold has resulted in widespread landscape damage and crop losses, as well as an increase in Lyme disease and deer/car collisions. Southold Town's Deer Management Program is the most efficient and effective means currently available for reducing Southold's deer population. In cooperation with the State, Southold participates in the NYSDEC Deer Management Assistance Program (DMAP) and the NYSDEC Deer Damage Permit "Nuisance" Program (DDP). Through both of these programs, additional antlerless deer tags are issued and only licensed resident bow hunters are eligible to participate. From the initial 2008 hunting season through the 2015 Nuisance season, more than 1100 deer have been harvested. In 2014 a total of 288 deer were taken with 165 donated to food banks. Since 2008 the program has donated more than 30,000 pounds of venison for Venison Coalition, feeding the hungry at local pantries across Long Island. 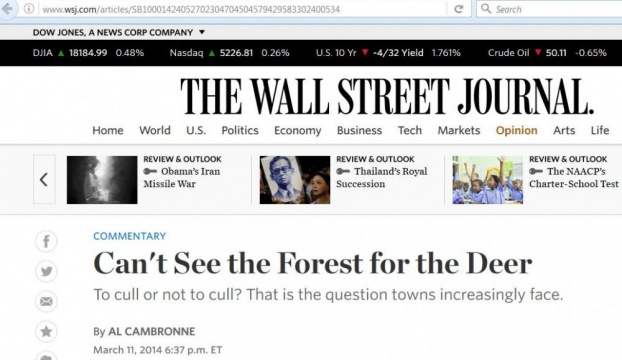 Can't see the forest for the deer
×

To cull or not to cull? That is the question towns increasingly face.